New Live Album Live at The Waterhole Due Out October 5th 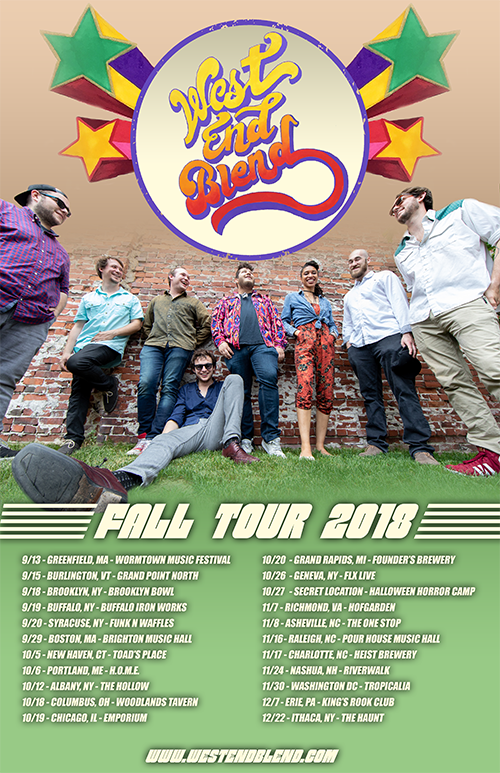 “When you’re right in front of West End Blend, it’s hard to not be physically blown away by their powerful sound and deep grooves.” – WNPR

The soulful powerhouse ensemble known throughout the Northeast as West End Blend has shared fall 2018 tour details. “This tour stands to be one of our most exciting tours to date,” shares Sam Horan, the band’s drummer. “We’re visiting some brand new cities and we look forward to expanding that WEB family!”

The tour will see performances across the northeast, in places like Brooklyn, Buffalo, Syracuse and Albany, NY; Boston, MA; Portland, ME; and a hometown throwdown in New Haven, CT at Toad’s Place. Midwest dates include plays in Columbus, OH; Chicago, IL; and Grand Rapids, MI. Halloweekend has a Secret Location TBA for the Halloween Horror Camp, and southeastern markets like Richmond, VA and Charlotte, NC will be hit on this run. The band then heads back to the northeast for performances in Nashua, NH; Washington, D.C.; Erie, PA; and Ithaca, NY.

Tickets are on sale this coming Friday, September 14th at 12 pm ET and can be purchased via the band’s website.

In addition to the extensive fall tour, West End Blend recently shared plans for their first formal live release, Live At The Waterhole, due out October 5th, 2018. “We’ve been getting so many requests for a live album from our fans,” elaborates Horan. “Everyone can agree that while our studio albums sound great, they just don’t quite capture the raw energy and vibe that you see from us live.”

Recorded live during a two-night run at The Waterhole in Saranac Lake, NY, this album encapsulates the band’s performances over the first annual “Blender” – a weekend filled with nonstop live performances at The Waterhole, curated by West End Blend. Together with the band, GRAMMY Award-winning engineer Brendan Morawski built a studio-style soundboard side stage yielding studio quality recordings of both evenings. When deciding which songs were going to make it to the new album, West End Blend tried to pick those which have taken on new arrangements and have morphed significantly from the studio album versions. Horan continues, “We are constantly re-arranging our songs as we continue to perform them live and we wanted to showcase that to our fans.”

Fronted by vocalist Erica T. Bryan, the band pays homage to classic throwback sounds while adding their own distinctive flair. The Hartford Courant sums it up best – “West End Blend sounds like the funk giants George Clinton, Earth Wind & Fire, Kool & the Gang, but it’s closer in spirit to the more recent acid jazz: the Brand New Heavies, Jamiroquai, Digable Planets and others, who pull together various strains of funk, soul, hip-hop and jazz.”

Bryan is joined by Sam Horan (drums), Mike Dipanfilo (guitar/synth), Jesse Combs (guitar), Mike Badundo (vocals/trumpet), John Mundy (trombone), Tom Sullivan (bass) and Paulie Philippine (keys), solidifying their 8-piece lineup. Formed during Halloween 2012, The Blend made their debut in the basement of the “Funkhaus,” the Hartford, CT-based house in which almost all of them lived, rehearsed and recorded in at the time. Today, many band members still reside in the “Funkhaus” which has matured into a fully operational recording and filming studio.

In their short tenure together, West End Blend has shared the stage with nationally recognized acts such as Charles Bradley, Turkuaz, members of Snarky Puppy and Lettuce, Break Science, Kung Fu, Twiddle, Sister Sparrow & the Dirty Birds, The Nth Power, The Motet and countless others. Their horns have also been featured as special guests with bands such as Dopapod, Pigeons Playing Ping Pong, Twiddle, TAUK and more.