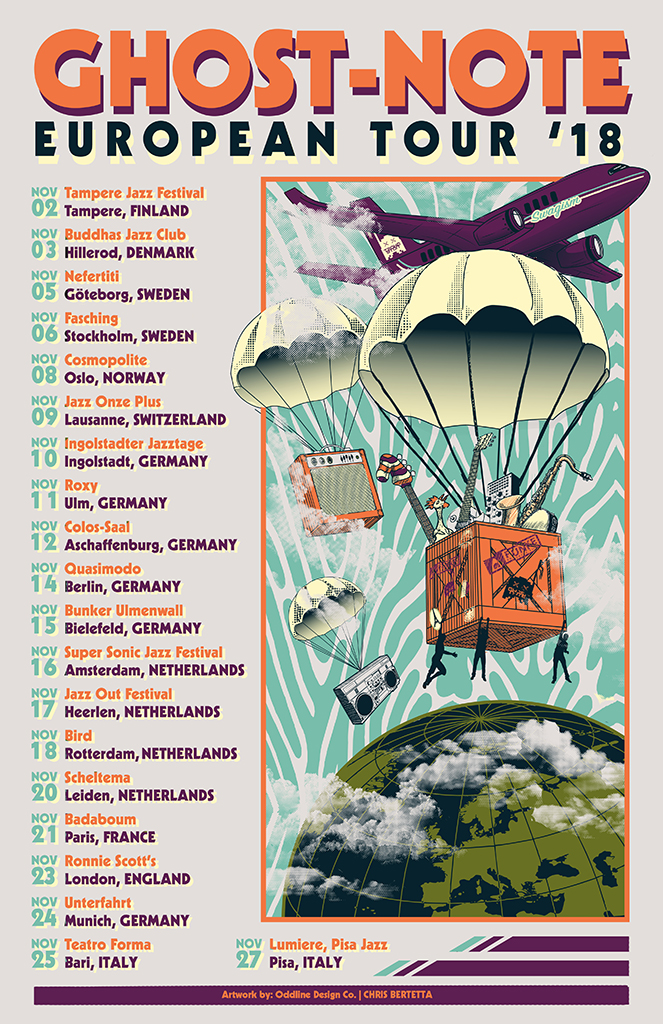 Dates will see the masterful 7-piece play performances in Norway, Switzerland, France, and England, with multiple dates scheduled throughout Sweden, Germany, the Netherlands and Italy. From November 5th, 2018 until the 27th, Ghost-Note will visit 18 overseas cities, hitting jazz clubs and jazz festivals alike.

Tickets are on sale now and can be purchased through the band’s website.

So far, the live performance has been turning heads. “Throughout the show, they demonstrated a good balance between lyric and freestyle,” writes The Feedback Society after catching their breakout performance at Sasktel Saskatchewan Jazz Festival earlier this year. “Their notes and runs were clear and articulate; the drum hits defined. There were show-stopping riffs, catchy hooks, and head-turning Latin beats…The expertly executed use of free-form solos enhanced the performance rather than taking away from it, which can be a risk with jazz music.”

Ghost-Note was conceptualized in 2015 to showcase the diverse musical landscape of Dallas, TX. That birthed the ensemble’s debut record, Fortified, under the moniker. This past April, Sput and Werth – who are best known for their affiliation with the jazz-fusion band, Snarky Puppy – headed back into the studio for the follow-up release, Swagism, which garnered a #1 position on the iTunes jazz charts. The current album showcases a more evolved sound, elaborating on the sonically powerful and diverse talents of each individual member of the group, and features over 20 guest musicians, including Kamasi Washington, Karl Denson, Nigel Hall, Brandon “TAZ” Niederauer, and many more.

Live performances of the unique supergroup have been scarce, until now. Catch them in a city near you. A full list of upcoming dates can be found below.