Nashville, Tenn. – Two-time GRAMMY award-winning duo for KING & COUNTRY will bring their acclaimed live show to audiences around the world with the announcement of their burn the ships | world tour 2019 where they’ll perform music from their third studio album, burn the ships.  The band will begin their global trek at the end of January in New Zealand and their homeland of Australia – including a SOLD-OUT show at the Sydney Opera House – and will be hitting the United States for a run of dates starting on March 8th in Augusta, GA. This new tour will see for KING & COUNTRY bring their highly theatrical, inspirational, and laser/LED video wall-filled concert to more intimate theatres, and will make stops in markets like Savannah, GA; Birmingham, AL; and Memphis, TN before wrapping up in Beaumont, TX. Tickets go on sale Friday at 10:00am (local) and can be purchased at the link provided HERE.

Joel states, “This autumn, Luke and I took a chance and went into small theatres across the United States with the hope of introducing our audience to the new album in a personal and intimate way. It was such a euphoric experience for us and was received so well by you that we became determined to carry it on this spring as part of our burn the ships | world tour 2019!”

for KING & COUNTRY have released an epic remix of their No. 1 hit “joy.” – produced by electronic artists Fransis Derelle and Jinco – just in time to begin celebrating the most joyful season of the year! The two artists have reinterpreted the track with expertly curated synths, and pulsing, high energy rhythms that give the song a brand-new sonic texture. You can stream the track on Spotify at the link provided HERE.

These last few weeks have been record setting for for KING & COUNTRY, starting off with the October release of their third studio album burn the ships. The time and hard work spent working on that record have paid off in spades, as the album debuted at No. 7 on the all-genre Billboard 200 Albums chart. These milestones propelled the band to their biggest ever sales week and their first ever top 10 album. The album’s lead single “joy.” currently stands at No. 30 on the Hot AC Chart. Now, with a stage setup filled with laser shows and walls of moving images, Joel and Luke Smallbone are thrilled to share their most impressive work to date with the upcoming burn the ships | world tour 2019.

for KING & COUNTRY are currently on the road, bringing their Little Drummer Boy | The Christmas Tour to an arena near you! This tour has produced three SOLD OUT shows in major markets, including Chicago, IL; Washington, DC; and Reading, PA. The group just released a music video for a “rewrapped” version of their famous drum-filled rendition of the Christmas classic “Little Drummer Boy” to commemorate this tour, and you can watch at the link provided HERE. 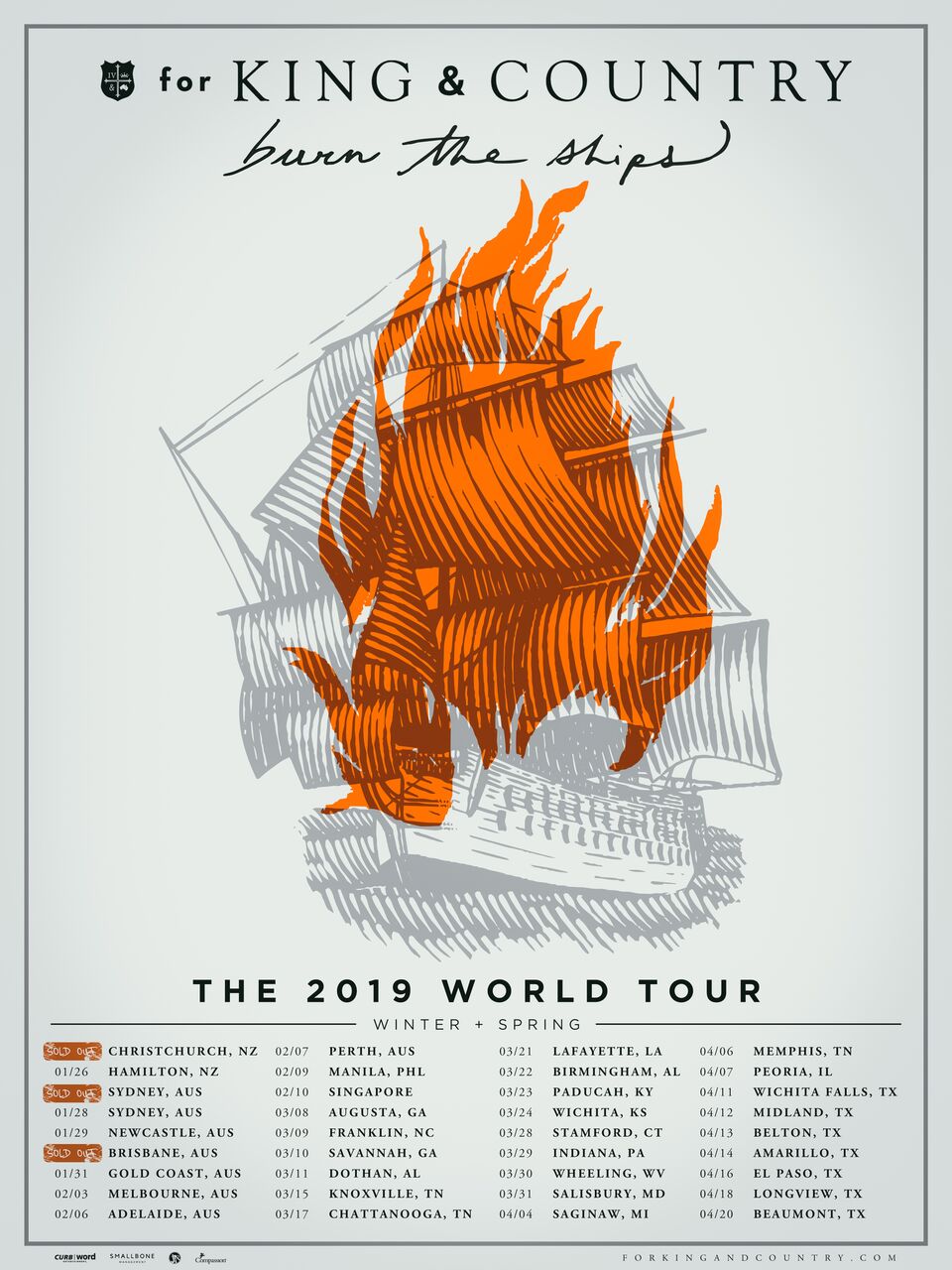 Two-time GRAMMY® award-winning Australian duo, for KING & COUNTRY, comprised of brothers Joel & Luke Smallbone, have recently released their much anticipated third studio album, burn the ships, a sweeping musical landscape that explores themes of new beginnings, forgiveness, hope, and love. The album’s soaring debut single, “joy,” held the No. 1 spot for consecutive weeks, marking the group’s highest debut on three Billboard charts. Their previous album, the gold-certified RUN WILD. LIVEFREE. LOVE STRONG., debuted at No. 1 on iTunes, and produced two GRAMMYs®, four Dove Awards, and a hugely successful 60-date arena tour. They have garnered four No. 1 hits, nine Top 10 hits, and had songs featured on the Emmys, Super Bowl, Sunday Night Football and other high-profile events, including performances on The Tonight Show, Today, and Jimmy Kimmel Live! In October 2016, the Smallbone brothers released the indie film inspired by their No. 1 hit of the same name, Priceless, about human trafficking.